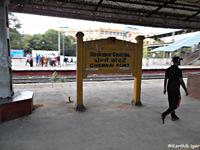 Oct 25 2013 (8:37PM)
Station Tag: Chennai Fort/MSF added by moderator**/12
Stations:  Chennai Fort/MSF   Chennai Beach/MSB   Tambaram/TBM
Posted by: Rang De Basanti^ 138770 news posts
5 carriages of a goods train were derailed and the train was left hanging on top the bridge over the Parry’s Corner subway on Friday morning. Over 300 feet of track was shattered as the track was not able to hold the weight of the train.Chennai Fort Railway station is situated in the MadrasBeach – Tambaram Sector. On Friday morning, a goods train headed to Trichy was derailed near the station. 5 carriages of the train, had gone down from the tracks. About 300 meters of the track was shattered due to the excessive weight of the train on the tracks. As the carriages that were derailed were over the Parrys Corner Subway, the train appeared to be hanging in mid air.Railway officials who rushed to the spot were involved in repairing the damage. As the chances for track shattering to such an extent are very slim, the Railway Police Force,...
more...
who are investigating are suspecting sabotage.
Page#    Showing 1 to 4 of 4 News Items
Go to Full Mobile site