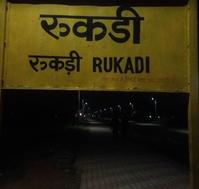 Oct 15 2019 (13:40)
Station Tag: Rukadi/RKD added by 12302 ER King~/1996412
Stations:  Kolhapur SCSMT/KOP   Rukadi/RKD
Posted by: Betaaj_Badshah^~ 96 news posts
KOLHAPUR: A couple from Pune’s Kalewadi area allegedly committed suicide on Sunday by jumping in front of a moving train near Rukadi railway station in Kolhapur.
The bodies of the deceased — Avinash Kalekar (43) and his wife Harshada (39) — were recovered late on Sunday.
Police said that the couple allegedly jumped in front of Kolhapur-Hyderabad Express near Rukadi railway station. The incident came to light on Sunday morning after passers-by spotted the bodies of the deceased on the railway track and informed railway officials.
Police...
more...
said that they conducted the formalities at the spot and transferred the bodies to the Chhatrapati Pramila Raje (CPR) civil hospital for post mortem. The bodies were completely disfigured, leaving zero chance of identification.
“We communicated with all the concerned police stations in the vicinity. While connecting with different police stations, we came across a case of missing couple registered with the Wakad police station. We checked the deceased’s mobile phone and tried to establish a link with the case of the missing couple. We also sent out details about the deceased’s clothes and other details to the concerned police station,” said an official from Kolhapur railway police.
After the details of the deceased matched with the missing couple, police asked the complainant who filed the missing complaint to visit Kolhapur for identification of the bodies.The complainant confirmed that the bodies found are of his brother and his wife,” the official said.
“We have handed over the bodies to the relatives of the deceased and have transferred the case to the Wakad police station for further investigation,” he said.
Police said that the couple is survived by a 13-year old daughter and an 11-year-old son. The couple’s son is studying at a residential school in the Mudhal titta area of Bhudargad taluka of the district.
Page#    Showing 1 to 1 of 1 News Items
Go to Full Mobile site