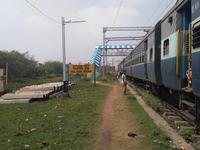 Mar 22 2017 (19:14)
Train Tag: Balangir - Bhubaneswar Express/12894 added by karbang~/50057
Trains:  Balangir - Bhubaneswar Intercity SF Express/12894
Stations:  Nilgiri Road/NGRD
Posted by: karbang~ 753 news posts
The passengers of the BangiriposhiBhubaneswar Super fast express had an providential escape, today as some alert villagers of Khannagar noticed around a five inch crack on the track and took timely action to stop the train.They showed a red cloth signaling the train to stop after they noticed the gap about 200 meters before the Nilgiri station.The driver managed to stop the train before 20 metres from the crack site and averted a major mishap, said a passenger.The train doesn't have a stoppage at Nilgiri road station, which is the next station from Balasore end. The train after leaving Balasore had already picked up speed. Another passenger of the train, Sudhakar Sethi, also a rail employee said, ''Had the villagers not promptly halted the train in time there might have been a major accident.''Station manager, Satyaranjan Rout said,''The train left for its destination about 25 minutes after the line was restored...
more...
to safety. The reason of the crack is yet to be established and under investigation of railway technical wing
Page#    Showing 1 to 2 of 2 News Items
Go to Full Mobile site