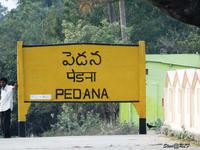 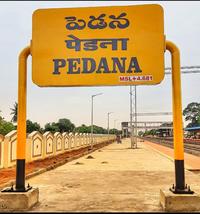 Feb 02 2015 (11:14PM)
Train Tag: Machilipatnam - Secunderabad Special/07049 added by irctcnewsin/879948
Trains:  Machilipatanam - Secunderabad Special Fare Special/07049x
Stations:  Gudlavalleru/GVL   Mahbubabad/MABD   Kazipet Junction/KZJ   Vijayawada Junction/BZA   Khammam/KMT   Gudivada Junction/GDV   Pedana/PAV
Posted by: irctcinblogspot 469 news posts
07049 Machelipatnam Secunderabad Jn Holiday Special
Valid From 1st February 2015 to 22nd February 15
Via: PEDANA(PAV),GUDLAVALLERU(GVL),GUDIVADA JN(GDV),VIJAYAWADA JN(BZA),KHAMMAM(KMT), MAHBUBABAD(MABD), WARANGAL(WL),KAZIPET JN(KZJ)
Aug 05 2014 (06:31) Crackers in dump might have triggered Pedana blast: police (www.thehindu.com)
Commentary/Human Interest
SCR/South Central
News Entry# 188289      Past Edits
Aug 05 2014 (6:31AM)
Station Tag: Pedana/PAV added by rdb**/69261
Stations:  Pedana/PAV
Posted by: Rang De Basanti^ 138863 news posts
Police, who are investigating the blast at Pedana railway station that killed a seven-year-old boy on August 2, suspect it could have been due to the presence of unused crackers and other inflammable materials in the garbage dump.
According to police, Idris, who is undergoing treatment at the Machilipatnam Government Hospital for the injuries sustained in the blast, has stated that Rafi, the deceased, had brought a packet and lit it, causing the explosion.Speaking to The Hindu on Monday, Krishna Superintendent of Police G. Vijay Kumar said police had recorded Idris’ statement.“After returning from school, Rafi brought a packet from the house of Nancharamma who lives in the locality. We both went out to play. He [Rafi] lit the packet and threw...
more...
it into the garbage dump,” Idris told the SP.
The officer confirmed that the crackers seized from nearby houses and samples collected from the blast site almost matched. “Had the blast been triggered by detonators or some other powerful materials, the impact would have been much higher,” he said. Meanwhile, police have sent the samples to the Forensic Science Laboratory (FSL), Hyderabad, for examination.
Page#    Showing 1 to 2 of 2 News Items
Go to Full Mobile site