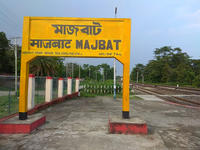 Dec 08 2018 (16:46)
Train Tag: Dekargaon - Rangiya Passenger/55722 added by 12649⭐️ KSK ⭐️12650^~/1203948
Trains:  Dekargaon - Rangiya Passenger/55722
Stations:  Majbat/MJBT
Posted by: Yash M^~ 4129 news posts
Two hardcore militants belonging to the banned National Democratic Front of Bodoland (Songbijit faction) or NDFB(S) were arrested by security forces from Mazbat Railway Station in Udalguri district on Assam on Thursday evening.
The arrested militants were identified as Swmkhwr Daimary alias D Swgwr(23), an inhabitant of Daifang Khoirabari village under Udalguri Police Station of Udalguri district and Jwngswr Mushahary alias M Jwmwi(18) an inhabitant of Salguri village under Serfanguri PS of Kokrajhar district.
Security sources informed that acting on a specific intelligence input, a joint team of security forces comprising troops of...
more...
14th battalion of Garhwal Regiment of the Army, Cobra Commandos and police from Mazbat Railway Station under Mazbat Police Station in Udalguri.
The two NDFB (S) cadres were arrested from Coach No.4 of Dekargaon-Rangiya Passenger train. Both of them were trained cadres of the outfit who were travelling from training camps in Myanmar.
A case has been registered against the two militants at Mazbat Police Station vide case no.66/18 and they are being interrogated.
It may be mentioned that security forces and Assam Police have of late have raised the guard against insurgents in the state in the wake of recent strikes carried out by proscribed ULFA(I) in eastern Assam areas.
As many as nine NDFB(S) militants were arrested with arms and ammunition along Assam-Arunachal Pradesh boundary near Jagun in eastern Assam a few days back while they were returning from training camps in Myanmar.
Page#    Showing 1 to 1 of 1 News Items
Go to Full Mobile site